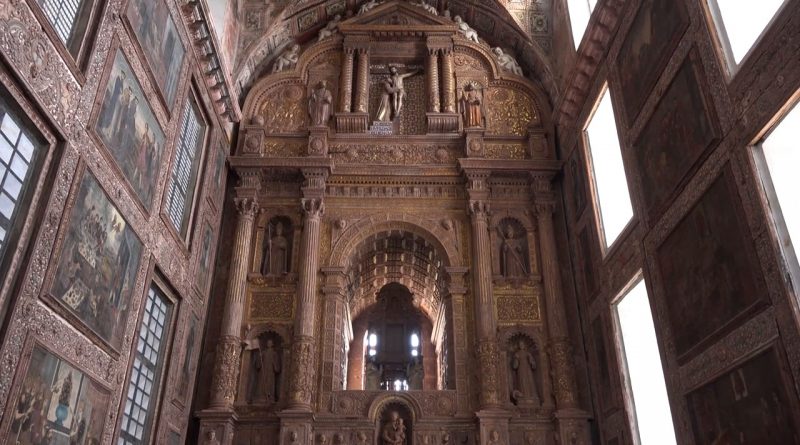 Old Goa has preserved a rich architectural heritage of the Portuguese pious Catholics, some buildings are unique and are real masterpieces of the late Middle Ages. Originally the town included fort with a wall, a moat and watchtowers. On the territory of the fort is a temple, a mosque and palace. Portuguese Afonso de Albuquerque conquered the area in 1510. To secure victory, he ordered the destruction of all Muslims, and Old Goa became the administrative center of the Portuguese colonies in India. Because malaria epidemics in the 17-18 centuries. All his people moved to the suburbs of Panaji. This place is convenient for tourists as it is located near to all attractions.

Old Goa was a fortress within which, and, later, outside of which, constructed buildings and structures for various purposes.
In this place a lot of attractions. About many of them, we will tell you in this blog. The most famous church of Old Goa is the church Basilica of the Merciful Jesus. it became the first church in India, received the status of basilica. Se Cathedral is the largest church of Goa, India, and probably the whole of Asia. The initial design is built of mud, straw and stones in 1510 and is dedicated to St. Catherine.

You can visit this church and see all its beauty in person.
The house Jesuits was built by the Jesuits of Goa in 1594 in the city center. It was a remarkable building of its time. The modern building is part of the original construction, which partially destroyed by fire and time. In one of the rooms on the third floor for 13 years were kept the relics of St. Francis Xavier.

Currently the building is the center of the movement “Light of the World” and is going to his followers, among them not only Christians.many cathedrals and churches on the territory of Pornnem Goem.

Pornnem Goem is a complex of architectural works, which are the heritage of the whole of India

Visit Old Goa, as a rule, is part of a popular tourist destination. Beautiful nature enchanting with its picturesqueness. Church and Monastery of St. Monica are located near the chapel of St. Anthony. The monastery is big enough to take hundreds of nuns who came from different countries of the East and the West. Its exterior design is a combination of Tuscan, Corinthian and mixed styles. Decorating inside is made in the spirit of the Doric.

The main altar also includes an image of St. Monica, mother of St. Augustine, who dedicated the monastery and church. Now here is the theological center for monks.

Many tourists come to India especially to see her archaic monuments. Church of Sts. Peter is located on the way from Panaji to Pornnem Goem. A very old, built in 1542 or in 1543 by Portuguese architects. On the floor, looked through almost erased inscription. Behind the main altar visible wooden frame, this decorated with sea shells. Church of St. It was built back in 1661 in the Corinthian style, its interior decoration designed in the Baroque style. Here you can see the sculptures of angels and saints, as well as gold-plated altars. There is a timbered platform in a square. Many tourists prefer to do daytrip in the old Goa. This time is enough to see all in full to all the attractions this amazing place. Sure to visit this landmark of India.